In the forests of New Brunswick, Nova Scotia, Quebec, and New England, a pest called the spruce budworm has long been enacting a quiet takedown that threatens to destroy the natural landscape and devastate communities dependent on forestry. Most recently causing damage to over four million hectares in Quebec, the budworm munches its way through a tree’s needles, and produces larvae which continue its legacy until whole forests, along with the wildlife that call them home, are destroyed.

Fortunately, today’s budworm faces a threat of its own in the form of natural toxins produced by fungi (also called endophytes) that live within conifer needles. Or when you consider the toxins have always been there, you might say the threat is Carleton chemistry professor Dr. J. David Miller, who has devoted decades to identifying which endophytes best repel the budworm without harm to the tree. Now his efforts have been recognized by the prestigious NSERC Synergy Award, just the latest of many grants and awards.

For Dr. Miller, the realization that these pests cause damage not only to natural environments but to livelihoods came early. “I was interested in it because of my own experience as a student,” says Dr. Miller. “I was living at a time when the forest communities were losing jobs because of the damaged forest and there was a lot of spraying going on just to keep the trees green.” This stuck in his mind and more than a decade later when the idea that endophytes of conifers might affect pests like the spruce budworm came up, he began investigate. As part of a team led by professor John Findlay at the University of New Brunswick, he began searching for endophytes of spruce and fir that produced compounds that affected the growth of spruce budworm in the lab, patient work when you consider the number of strains to get through.

“It’s like looking for a needle in a haystack without knowing what the needle looks like,” says Dr. Miller. Undeterred, Dr. Miller was boosted equally by existing research on endophytes (long identified as present in many plant types including grasses) as well as local foresters’ stories of “escaper trees” that had stood healthy amidst devastated forests. So the team went fishing. After six years: success.

“We ended up being able to show that some fungi, in the white spruce particularly, made toxins that were toxic to insects but not much else,” says Dr. Miller.

A new partnership was also essential for the next stage of the research. “To move this forward, notably after I came to Carleton, I really needed two important things. I needed access to a genetically diverse population of white spruce seedlings. And I needed people who really knew how to grow trees,” says Dr. Miller. So in 1997 he wrote officials at J.D. Irving Woodlands, the forestry arm of a company based in Saint John, New Brunswick. This company manages 2.4 million hectares of forest land. Fast forward almost twenty years, and the partnership has been invaluable to both sides.

“J.D. Irving understands that you can’t do something like this in agriculture or forestry unless you really understand how it works. They’re not shy about contributing to the significant science that has gone into this,” says Dr. Miller. His contacts at J.D. Irving are equally keen about the relationship.

“When you’re after a particular improvement, you need to bring together the expertise that’s relevant. Clearly the most expertise in this area, both on the fungus side and on the chemical analysis, was what Carleton and Dr. Miller brought to the table,” says Greg Adams, Manager of Research and Development with J.D. Irving Woodlands. 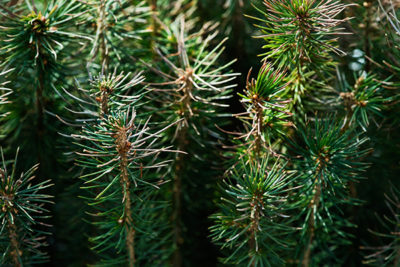 In practical terms, the partnership allows Dr. Miller to take advantage of J.D. Irving’s knowledge and management of the landscape (the company has had a tree planting program since 1957, and a genetic tree improvement plan for over 30 years). If Dr. Miller wants to investigate a new endophyte strain, J.D. Irving’s experts can source it. “We have samples from across the region and people in the field. If we wanted to, for instance, take a survey of particular endophytes across a broad geographic range, then we would have capability to execute that,” explains Adams. The company can even create the initial cultures of the lab in its facilities.

For Dr. Miller’s graduate students, the J.D. Irving connection provides the added benefit of exposure to forestry at the ground level. Dr. David McMullin, a Mitacs postdoctoral fellow who has worked with Dr. Miller since September 2014 to carry out endophyte screening, says that visiting the J.D. Irving operation has helped him to see the world of forestry beyond academia. “I’ve taken a trip to see their greenhouses where they conduct their endophyte inoculations. It’s overwhelmingly impressive,” says Dr. McMullin. He’s also sees value in the partnership.

“We would not be able to conduct this type of research without their help. To have access to so many resources, it’s been overwhelmingly positive.”

While endophytes may be the spruce tree’s saving grace, their potential extends beyond that species and even beyond trees full stop. In forestry, attention has recently turned to combatting a pest called white pine blister rust attacking trees in Western Canada. Even beyond that world, Dr. Miller says we’re just at the beginning of understanding the potentially endless application of these fungi, most of which have never been identified and named.

In fact, that’s where he gets a bit philosophical about the hard work but big payoff in the fishing trip he’s been on for these past decades. “Larger discoveries are made when greater risks are taken. We can look back now and say, ‘We knew it all along,’” he says of the properties of endophytes. “But it’s not true. It may sound easy to find a culture of a fungus that has a particular biological activity: antibiotic, antifungal, anti-insect. But it’s not easy.”