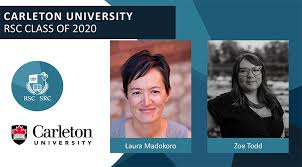 In times of turmoil, the lessons of history and society can shine like beacons.

The Royal Society of Canada (RSC), which promotes a culture of knowledge and innovation in Canada, recognizes the value of hard-won research in helping us understand the present moment. In early September, they inducted two Carleton researchers as new members of the 2020 incoming class of the College of New Scholars, Artists and Scientists.

Members of the College are Canadians and permanent residents who, at an early stage in their career, have demonstrated a high level of achievement, which both History Prof. Laura Madokoro and Anthropology Prof. Zoe Todd have done. 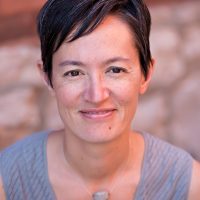 Madokoro joined Carleton in July 2019. Her research focuses on the history of refugees, humanitarian assistance and refuge.

Madokoro’s work suggests that insecurity and fear have played important, historical roles in the changing definition of sanctuary over the centuries. The history of human displacement raises questions about agency and vulnerability and what people do in response to perceived need.

Her book Elusive Refuge: Chinese Migrants in the Cold War interrogated the nature of this in relation to thousands of Chinese migrants who left the People’s Republic of China after 1949. Histories of exclusion meant it was difficult for them to find refuge beyond Hong Kong and Taiwan. In Canada, there was resistance to more open immigration until the 1960s. The advocacy by Chinese community leaders, churches and humanitarian organizations made a real difference in the lives of these refugees.

“There are foundational issues around the function of our society and economy that breed considerable injustice,” she says. “There has been progress but there’s still a great deal of work to be done.”

Madokoro has examined the extent and nature of this post-war progress, and insists on the role of civil society actors in effecting change. She is currently writing a history of sanctuary in Montreal to examine how societal attitudes have evolved with regard to people in need of protection, and she is also conducting preliminary research on the history of refuge among Indigenous communities in the United States and Canada.

“How can we take these really diverse stories and try to make sense of them?” she asks.

Madokoro says the current global health crisis has brought to light an argument that migration historians have long been making: migration isn’t limited to the crossing of international borders.

“The pandemic has shown us that we can think about migration in all kinds of different ways,” she says. “We had the border closed between Ottawa and Gatineau, which was, I think, shocking for many people.”

This shuttering reminds us that though we all live in an inherently mobile world, where barriers are all too easily erected with often dire consequences for the most vulnerable people. 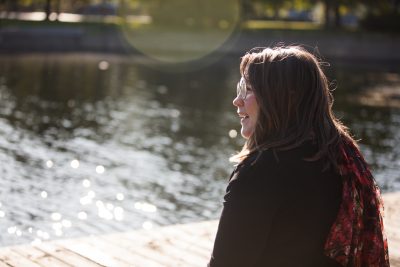 Todd is a professor in Carleton’s Department of Sociology and Anthropology. Her research focuses on fish, colonialism and legal-governance relations between Indigenous peoples and Canada.

By studying and learning more about fish — creatures that have been on the planet for more than 500 million years — Todd believes conversations in Canada about Indigenous self-determination, peoplehood and governance can be better informed.

“We have responsibilities to be reciprocal and thoughtful in how we move through the land and in how we behave as humans,” says Todd. “We have impacts, every one of us, and that means we are obligated to consider how we can best nurture the planet and be just to the species we share our space with.

“We must acknowledge the ways we are embedded in webs of relations.”

Todd’s work builds from the theories of many researchers and knowledge keepers that explore animal-human relations. She collects all manner of conservation stories and efforts through a project called Plural Perspectives. The project also comes with a digital toolkit to help others present their conservation stories in a manner that engages all audiences.

“I have done work on human-environmental issues for over a decade now, and one thing that became really clear in previous projects I have worked on is that everyone has a story,” she says. “One of the countless struggles that many communities face in advocating for more-than-human beings, lands, and waters is that the existing platforms for telling these stories are highly bureaucratized and technical.”

Todd’s Fall 2020 class “Indigenous Ecological Ways of Knowing” is open to the public, for anyone who is interested in Indigenous relationships to the environment. It covers the ways in which current environmental movements use theories and practices of Indigenous knowledge.

Much of this knowledge is taken without citation, which Todd aims to remedy. She makes certain that ecological workers acknowledge what they owe to the traditions of First Nations, the Inuit and the Métis, Todd’s people. Sharing knowledge is integral to working together against the climate emergency but so is giving credit where it is due.