What do abandoned old mines in northern Canada and munitions buried deep in the Baltic Sea after World War II have in common? On the downside, they are each leaching toxic chemicals like arsenic into the surrounding ecosystem, causing untold damage. On the upside, each site has Carleton Earth Sciences professor Tim Patterson helping to assess that potential damage so governments and companies can take action before it’s too late. 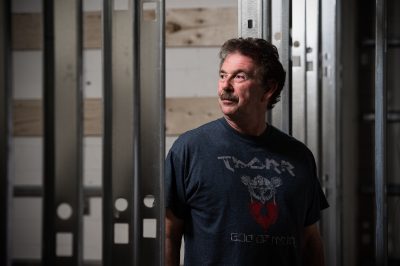 Already assessing the aftermath of mining operations in Canada’s Arctic, Patterson was recently awarded yet another grant for 25,000 euro from the Organisation for the Prohibition of Chemical Weapons (OPCW) to use similar methods to measure the environmental threat of over 50,000 tons of chemical weapons shells dumped into the Baltic Sea after the Second World War. He takes up the three-year proof-of-concept project along with colleagues Jennifer Galloway from the Geological Survey of Canada in Calgary (a Carleton alumna and Professor Patterson’s former PhD student), Helen Roe from Queen’s University Belfast in Ireland, and Hamed Sanei from Aarhus University in Denmark.

While dumping of toxic waste is regulated today, historically society has not spent time considering the future effects of these chemical weapons. “It was a wild west,” says Patterson. “There are chemical munitions dumped all over. And they didn’t take any effort whatsoever to try and make them inert. It was just convenient to throw them in the ocean and forget about them,” he adds, noting that current estimates count as much as 50,000 tons of chemical munitions at depths as shallow as 200 metres all over the Baltic Sea. There are many more tons of conventional munitions dumped in the Baltic Sea as well.

Seventy years after the war, we realize not only the potential for these chemicals to leach out of their containers but also the corrosive effects that salt water may have in speeding up the process. Then there’s the added wildcard of global warming, which also has an unknown impact. All of these risk factors add to the need to understand more about how quickly the chemicals are entering the ecosystem, so that governments and other agencies know how much or how little time they may have to prevent environmental devastation.

Patterson and his team will investigate the dump sites by analyzing two aspects, the concentration of chemicals in the sediment surrounding the munitions and the contamination levels in microscopic shelled protozoa called foraminifera. Studying both materials helps the researchers to triangulate a richer understanding of the overall situation. Each element also allows researchers to see the contaminant level at varying proximities to the munitions and over time.

For example, the foraminifera living closest to the munitions are species that have a higher tolerance for the arsenic and can survive the contamination. “Certain stress-tolerant forms of foraminifera will begin to appear, and then foraminifera with less arsenic and then eventually back to normal. In addition to that, because they have shells, we can actually analyze the shells and see if they’re taking up any of these heavy metals and incorporating them,” says Patterson, adding that arsenic actually results in shell deformities, making the species impact clearer. Since the foraminifera are so tiny, each a tenth of a millimetre, the gradation they present means that the measurement can be fairly precise. The researchers also compare these to control sites for even better insights.

While the sites may be half a world away, the methods that Patterson is using in the Baltic Sea are very similar to those in studying the mines, from sediment to sensitive micro-organisms. “It’s very analogous to what we’ve done in the Northwest Territories, which made us very well situated to take on this research,” says Patterson, noting that the project is a bit of a return for him since he studied marine environments early in his career. The fact that his team is already seeing success in their methods in the north gives him confidence that the approach in the Baltic Sea will afford similar insights. 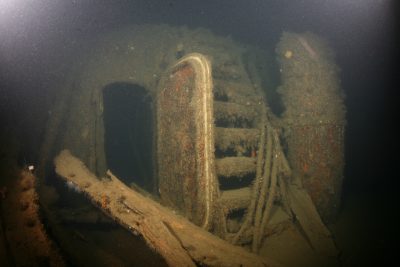 So, what are the consequences if the munitions are leaching chemicals? Patterson says it may be serious. “If it ends up that these are really terrible for the environment, governments may have to try to retrieve them, and process them. And that would be expensive,” he says. But not knowing is obviously worse.  “Eventually these chemicals will break down completely, but at what cost to the environment? It comes down to weighing and this is why we study these sorts of things.”

Click here to view an interactive map of known sites around the world where munitions have been dumped.