The prestigious fellowships, named for Nobel winner Sir Frederick Banting, allow dedicated scholars to develop their research with $140,000 of funding over two years.

Rena Bivens, recognized internationally for her research, is currently investigating how non-profits use social media platforms, particularly in their goals to end gender-based violence.
Hillary Maddin is prominent in the field of evolution theory as she attempts to fill in the gaps in the record of amphibians. Interdisciplinarian Sophie Tamas is currently researching emotional geography, sites of memory and managing loss to document the cumulative cost of domestic abuse.

“Our Banting Fellowship award winners are outstanding researchers and rising stars in their respective fields,” says Wallace Clement, dean of Graduate and Postdoctoral Affairs “We look forward to the future contributions they will make to our thriving research landscape as postdoctoral fellows and down the road as future faculty members.”

Following doctoral work in TV journalism at the University of Glasgow, Bivens changed her focus to gender-based violence during a postdoctoral fellowship at the Pauline Jewett Institute of Women’s and Gender Studies at Carleton in 2011.

“I’m interested in the nexus between technology and the public users of software,” says Bivens, who hopes better social media design (of such platforms as Twitter and Facebook, for example) will result from her work. “I’m particularly interested in trying to help non-profit users mitigate the complexities of the code under the hood of the software and to figure out ways they can be literate about social media technologies, so they can use them more effectively.”

Bivens is “absolutely thrilled” to be a Banting Fellow. “It’s an amazing opportunity for me to immerse myself in my research. I have such a thirst for knowledge and the disciplines I am trying to integrate into this project.”
“Violence against women is a serious problem in Ottawa and across Canada,” adds her supervisor, Joshua Greenberg, associate director in the School of Journalism and Communication. “(Bivens’s) project will make significant contributions to media studies scholarship, and it highlights the importance of Carleton’s commitment to promoting high quality community-engaged research.”

Maddin is taking advantage of the Banting Fellowship to investigate new aspects of morphological evolution in the lineage leading to modern amphibians.

“The fellowship provides me with an opportunity to develop a focused research program and . . . to launch my career as a research scientist at Carleton,” says Maddin, who expects the results of her work will provide information about the importance of the brain in the evolution of the amphibian skull and other animal groups.

Maddin’s work will highlight Canada’s east coast as a hotspot for paleontological discovery.

Maddin admits she has always been interested in paleontology.

“As a kid, I loved prehistoric animals. Today I am driven by the excitement of discovery and by the opportunity to study the history of life to better understand the present and future of animal diversity.”

As Maddin learns more about how tetrapods came to be in their present form, she anticipates revealing novel insights into the conservation of evolutionary processes.
Claudia Schröder-Adams, a professor in the Department of Earth Sciences and Maddin’s supervisor, suggests Maddin’s work will highlight Canada’s east coast as a hotspot for paleontological discovery.

“I am excited to share future discoveries with such a talented young researcher,” adds Schröder-Adams.

Tamas, after studying the aftermath of abuse for her PhD, and examining alternatives for managing loss during a two-year SSHRC postdoctoral at Queen’s University, was ready to share her knowledge about the impact of abuse with other scholars.

Courageously and insightfully blurring the boundaries between art, scholarship and activism, Tamas’s research promises to impact the women whom she will work with 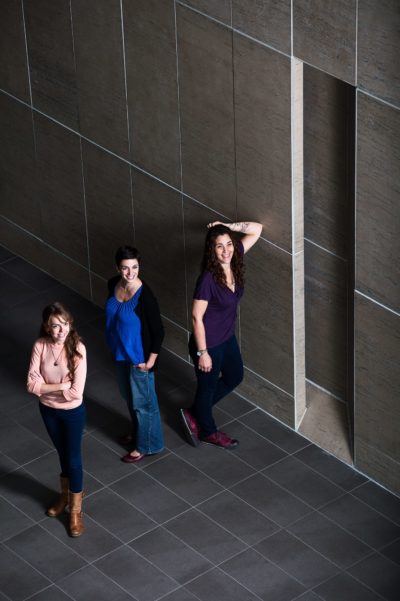 “I applied for dozens of academic jobs and didn’t get a nibble. I was scouring Charity Village for ‘real’ jobs when the (Banting) results were announced,” says Tamas.

Under the fellowship, Tamas is working with Carleton’s Geomatic and Cartographic Research Centre to create a web-based atlas where survivors will post images of places or things lost or changed by leaving abusive situations.

“Things with value – like people or relationships — often require a two-stage disposal,” Tamas explains. “The first disposal moves it into a sort of holding area while we come to terms with its loss. The second disposal happens when we accept the waste and move the thing along into a public space where its value can circulate and reform.”

“Courageously and insightfully blurring the boundaries between art, scholarship and activism, Tamas’s research promises to impact the women whom she will work with as part of her . . . study,” says Tamas’s supervisor, Canadian Studies Professor Peter Hodgins.

Adds graduate programs supervisor Fran Klodawsky, who is also overseeing Tamas’s project, “Tamas is an exciting and innovative new scholar in the field of emotional geographies. Her myriad efforts to develop theoretically informed arts-based strategies that work with traumatized survivors of domestic abuse are examples of engaged scholarship at its best.”