These are the first nine words in the introduction to Canada’s Residential Schools: Missing Children and Unmarked Burials. This 273-page volume of the Final Report of the Truth and Reconciliation Commission was published in 2015, yet most Canadians have never read this powerful sentence. The volume’s first paragraphs also acknowledge elevated death rates in the Residential School System, and note that when children died, their bodies were usually not returned to their communities. It even concedes that many burial places at former Residential Schools are disused, abandoned, and even unknown. 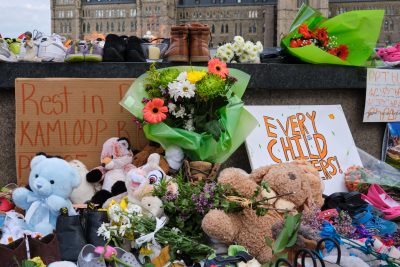 These facts became all too evident when ground penetrating radar revealed 215 unmarked burials at the Kamloops Residential School, on the traditional territory of the Tk’emlúps te Secwépemc First Nation in British Columbia. The re-discovery of these burials in May 2021 should cause us all profound sadness and grief, but it should not cause a great deal of surprise. Residential School survivors have long told of students who died or disappeared, and the Final Report of the Truth and Reconciliation Commission even tacitly conceded the existence of unknown burial grounds. When ground penetrating radar is deployed at other former Residential Schools, it is virtually certain that more unknown burial grounds will be identified. As has been seen in subsequent discoveries of unmarked graves, the tragedy in Kamloops was the first of many.

Yet understanding the impact of colonialism in Canada takes work. The tragedy of the Indian Residential School System has often been silent or silenced, and it is only one aspect of a centuries-long colonial project that has dispossessed and marginalized First Nations, Métis and Inuit.

For non-Indigenous Canadians, there is much to learn. The Truth and Reconciliation Commission is a detailed and invaluable source, but its Final Report is more than 4,200 pages long. Similarly, the 1996 Report of the Royal Commission on Aboriginal Peoples is more than 3,300 pages long. Most people will be overwhelmed by the sheer size of these texts.

“People’s eyes glaze over when they look at 500 pages of documentation,” says Dr. Fraser Taylor, a Distinguished Research Professor and the Director of the Geomatics and Cartographic Research Centre (GCRC) at Carleton University.

“One of the challenges of the Truth and Reconciliation Commission is that there is so much documentary evidence that people do not fully see the importance of the central story.”

The Residential Schools Land Memory Atlas is a digital tool that seeks to share one of those central stories in a more manageable format. It makes the learning process more straightforward by aggregating information about Canada’s 139 residential schools on a single map. By using a geographical framework to organize this information, the Atlas allows its users to explore the history of individual Residential Schools. Users can choose to learn about a school that operated near their home, or one where some of the most horrific abuses occurred, like the St. Anne’s Residential School in northern Ontario, where the range of punishments included beatings with beaver snare wire and even an improvised electric chair.

The Residential Schools Land Memory Atlas includes profiles of individual schools with basic facts, such as when they operated and which religious denomination ran the school on behalf of the Government of Canada. The map also embeds digital files, and links out to key historical documents held by external organizations, like Library and Archives Canada. The Atlas is capable of sharing digital media that convey both archival and experienced-based knowledge, such as photographs, written records, historical news stories, hand-drawn and other maps made by students reflecting their engagements with survivor stories, YouTube videos, music, or almost any other type of digital file.

“It is a tool for reconciliation that allows users to explore the same story from multiple sources, and is based on an emergent approach that emphasizes relationships, stories and the living nature of history,” says Dr. Stephanie Pyne, a post-doctoral researcher at Carleton’s GCRC, and the lead researcher on the Atlas.

The project grew out of another GCRC cybercartography initiative that Pyne worked on in her PhD research, beginning in 2007. The Lake Huron Treaty Atlas is a living map of the history and geography that was inspired by and relates importantly to Anishinaabe territory around Lake Huron. The project incorporates information about culture, language, and traditional gathering places, and was funded by a five-year grant from that Social Sciences and Humanities Research Council (SSHRC, 2009-2013). 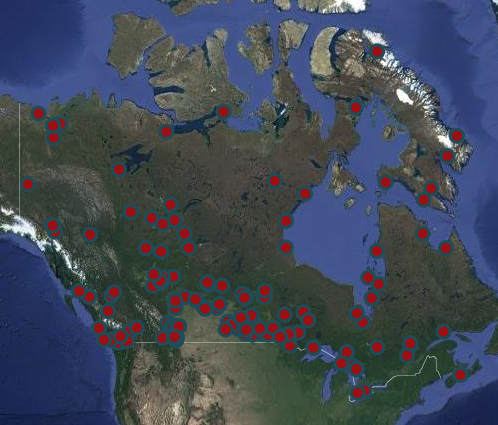 Organizing primary sources like archival materials in a geographical framework makes it more accessible than it is when it is part of a lengthy, text-based report, and the medium allows users to isolate smaller parts of a much larger picture. That could be especially useful when teaching younger students, and the researchers hope that the Atlas can be used at every level of education – from elementary schools to universities. Pyne is currently using it with graduate students at the University of Toronto.

“The map launched on June 21, 2020, but it is still an exploratory prototype at this stage,” says Pyne.

“Master’s students have been populating the map with additional materials, and interacting with the stories. They do summaries and reflections, and interpret these stories. The places they are associated with, or where they fit within the national policy story. It creates an awareness about the scope and diversity of the Residential School system. And it also reflects participation. Each student is participating in reconciliation by engaging through their piece of this map.”

The Atlas is funded through a five-year SSHRC grant (2015-20) that has received an extension until 2022 to continue its work. It is a multi-partner collaboration between academic institutions and Indigenous partners. This includes the Shingwauk Residential Schools Centre, the Children of Shingwauk Alumni Association, the Legacy of Hope Foundation and the National Centre for Truth and Reconciliation. On the academic side, Algoma University, Concordia University, and the University of Manitoba all made contributions, and so did Jeff Thomas, an artist and photographer whose work publicly recognizes experiences of the Residential School system in Canada.

One of the main aims of the Atlas is to share the stories of survivors. Many have been silent for decades, and have only recently begun to share their experiences.

“At some points in the past, there was a lot of silence about Residential Schools,” says Pyne. “That silence reflects trauma. In small pockets, sometimes people would mention something, but often, few details were shared. In general, survivors did not want to darken their environment with those kinds of memories.”

The map allows users to upload materials that relate to their experiences. That could be anything from old photographs that survivors saved, or works of art made by descendants who have lived with the intergenerational trauma inflicted by the experiences of their parents or grandparents. And there is in an urgency to documenting these stories.

“Residential School survivors are not young anymore, and many of them are, in fact, dying,” says Taylor.

“They are living archives of information about the Residential School system. They have told us about the deaths of children in the past. It is absolutely critical to capture the stories of more survivors. It helps give an idea of how people feel, and brings a very strong human touch to an important issue. This technology allows people to express their own words, and in ways that can be readily understood. These feelings are not driven by some abstract, impersonal concept of what happened. That is a top-down way of looking at it, and rather impersonal. We want to involve the personalities that have an understanding of the true impact.” 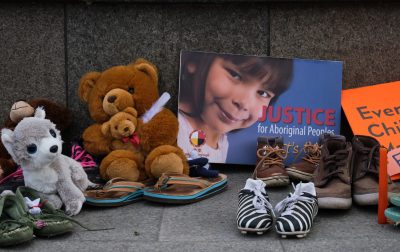 But like the wider public reckoning with colonialism that could finally be taking root in Canada, the Residential Schools Land Memory Atlas would benefit from additional documentation. Specifically, the release of records kept by the Catholic Church could help foster a deeper understanding of how Residential Schools operated. Not only do these records have the potential to illuminate abuses and excesses that have spent decades in the shadows, they could tell us more about daily life at the schools, and the impact of diseases like polio and tuberculosis. They might also tell us, in a very literal sense, where the bodies are buried, and help bring closure to families.

“The Catholic Church has so far refused to release those records, and they need to if we are ever going to get to the bottom of this,” says Taylor.

“Canadians should be apologizing for Residential Schools, but people need a greater degree of understanding of the reasons behind that apology.”