Zeroing in on the Cure to Cancer

There was opportunity afoot for new collaboration when two new medical physics researchers joined Carleton in 2010.

Rowan Thomson, a Carleton graduate and winner of the 2011 Polanyi Prize, and Gabriel Sawakuchi, a veteran of Houston’s M.D. Anderson Cancer Center, were each settling in and bringing their own connections to the classroom.

Then in conversations with Carleton’s Dave Rogers, a long-time medical physics researcher who works at the renowned Ottawa Medical Physics Institute, they came up with an idea to enhance the environment for students: form a single laboratory between the three of them, as a subset of the world-class OMPI lab.

Thus was born the Carleton Laboratory for Radiotherapy Physics, which involves the three researchers, about 11 post-graduate and senior undergraduate students, and one post-doc.

“Seeing we were all doing similar things, we decided we should operate as a single lab, so to speak, for branding and recruiting purposes,” said Dr. Rogers, who is a Carleton University Research Achievement Award winner and is only the fourth Canadian to ever receive the coveted William D. Coolidge Award.

“We get together once a month with all of our students and have group meetings. That way, students present some of what they’re doing. It’s a way of making sure students interact with each other.”

And great collaboration is already happening with an aspect of Dr. Sawakuchi’s research. At the M.D. Anderson Cancer Center, he conducted research into proton therapy to treat cancer using a $200-million unit on site.

Early results show it to be a much more targeted therapy than traditional radiation.

“What makes this therapy really good is the protons go a certain distance, and then stop delivering the dose quite suddenly,” says Rogers.

Seeing we were all doing similar things, we decided we should operate as a single lab

“So if you have a tumour against somebody’s spine, you can deliver a dose to the tumour with very little going to the spine, which is quite sensitive to radiation. There are lots of examples of that.” Dr. Sawakuchi carries on his research in Canada interpreting the characteristics of proton beam radiation.

Assisted by a Canada Foundation for Innovation grant and several students, he is establishing the instrumentation he needs to properly read and interpret the results from detectors such as the one he worked with in Houston.

And the collaboration with the CLRP is already bearing fruit in that endeavour, Dr. Rogers said, as it adds connections that hadn’t been anticipated before.

“One of his students has been going quite regularly to do research at the cancer clinic in Ottawa. He has also been collaborating with my wife, who is a cancer medical physicist there.” 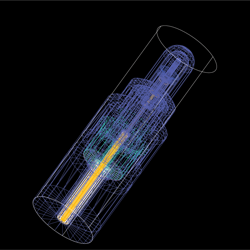 Inspiration for the CLRP came from the 22-year-old Ottawa Medical Physics Institute, of which Dr. Rogers has been a part since the beginning.
The members of OMPI do research in medical imaging, radiation therapy and radiation biology, among other things – but what distinguishes it is the breadth of research institutions that form the group.

According to Dr. Rogers, the group’s close-knit nature allows closer collaborations and connections and accelerates the effectiveness of its work.

“This is very useful as a networking group in that it allows us to all interact, and gives all of our graduate students a much broader education.”