The ERA is administered by the Province of Ontario to help promising, recently-appointed Ontario researchers build their research teams of graduate students, post-doctoral fellows and research associates.

This year’s ERA recipients are: 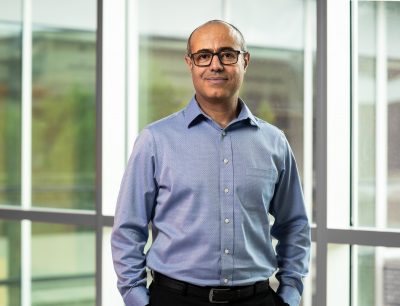 Associate Prof. Hicham Chaoui in the Department of Electronics aims to improve the reliability of energy storage devices. He is also developing intelligent energy systems based on batteries, supercapacitors and fuel cells that can self-monitor their capabilities and estimate their remaining useful life.

Chaoui essentially ages batteries through various conditions, such as higher temperatures, to see how long they can last.

“If we can know how these components degrade, we can predict when they will fail,” he says. “Once we have these aging precursors, we can develop algorithms to minimize their effects on the system.”

The average lifespan of an EV battery is around 10 years, depending on its operation. A self-monitoring EV battery resulting from Chaoui’s research would tell the driver how their driving affects its performance.

“That feedback is helpful and the driver adjusts his or her driving profile,” he says. “It could give him another prediction and say, ‘now, your battery can last 10 years.’”

Chaoui is also taking the long view because most vehicles will eventually become autonomous, and their energy systems will have to make their own driving decisions.

This research also covers supercapacitors and fuel cells, which are used in trains and in large trucks and busses, respectively. Their reliability is just as important as batteries because together they make up different ends of the energy storage spectrum.

“What we ultimately want is resilience of the whole grid,” says Chaoui. “Predicting and detecting energy storage failures is just the beginning of the story of making the whole grid resilient, from transformers and power converters to motors and generators.”

With the help of the ERA grant, Chaoui hopes to hire at least another three students to join the 24 already working in his Intelligent Robotics and Energy Systems lab.

“It is a wonderful grant because and it will allow me to hire top talents, honestly,” he says. “To be able to continue this very important energy storage research I need to be very competitive.” 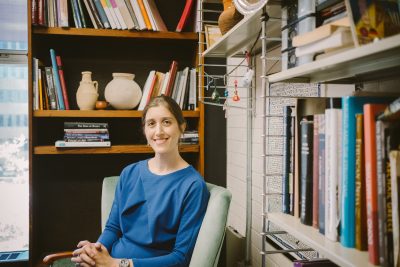 Greek and Roman Studies Associate Prof. Laura Banducci first became captivated by ancient artefacts during her PhD. While studying Classical Art and Archaeology at the University of Michigan, Banducci became very interested in ancient ceramics in the Italian excavation of Gabii. Items directly related to ancient people’s daily behaviours—cooking pots, utensils and objects of personal adornment like jewelry or hair pins—were most evocative and exciting.

In 2009 she joined the Gabii Project, an international archaeological initiative to study and excavate the ancient city-state located 18 km east of Rome. Today, she is the project’s Director of Finds and she regularly returns there with her own students.

“It’s an incredibly rich city in artefacts,” she says. “It’s very special because it’s relatively unusual in Italy to have a site that didn’t become a medieval town and then a modern town.”

For reasons not fully understood, Gabii declined in the first century BCE and was completely abandoned a few centuries later. Its excavation offers the chance to answer big questions about Roman culture and urbanism, and to offer the chance to new archaeologists to test their knowledge in the field.

Her ERA grant project will offer students a way to study artefacts in their original context. Banducci also hopes to attract students from the Carleton Immersive Media Studio to assist with digital recordings of finds and photogrammetry of the site so they can be presented to the broader public.

“To learn technical skills in an Italian archaeological site—how to handle, study and draw artefacts, how to think about material qualities like clay and metal—will allow them to bring those same skills to a Canadian context.”

Banducci believes that commercial archaeology will only become more important in Ontario. Pre-colonial sites and Indigenous Canada are well-represented in the archaeological record especially of the Ottawa region, so it’s essential to train a new generation to help explore and explain how interesting and important stories from archaeology can be. 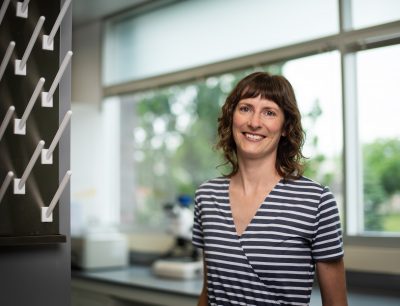 There are over 1.5 million people in Ontario—one in three Ontarians—diagnosed with either pre-diabetes or diabetes. This number, which continues to climb, has convinced Associate Prof. Jenny Bruin that genetics aren’t the only culprit.

Bruin, who is cross-appointed to the Department of Biology and the Institute of Biochemistry, is actively working to provide insight on how modifiable risk factors in our environment may be driving the increasing rates of diabetes in Ontario.

The Bruin Lab’s research focuses primarily on whether environmental contaminants such as flame retardants, pesticides and other agricultural chemicals play an important role in causing diabetes. Bruin is particularly interested in fluorinated chemicals—a.k.a. perfluoroalkyl and polyfluoroalkyl substances (PFAS)—that are regularly used in everyday products such as water repellency on rain jackets and coatings on non-stick pans.

“In the case of PFAS chemicals, some have been regulated but most have not,” she says. “What regulators need to be able to change the rules is good quality data.”

Bruin and her team are also working with the long-term data from the Maternal-Infant Research on Environmental Chemicals (MIREC) study, in which over 2,000 pregnant women from 10 Canadian cities were recruited as early as 2008.

MIREC data offers great insight to researchers like Bruin, who can look at how exposure to PFAS during pregnancy is linked to inflammation and other biological functions. By cross-referencing this data with her lab’s, she will be able to provide robust data on multiple tiers.

“We are trying to provide data at the human population level, in rodent models and then right down to the molecular mechanisms in the cell,” she says. “I’m hoping those different levels of data will provide more compelling clues.”

Bruin currently has one PhD student working on PFAS research and she is hoping to recruit more thanks to the ERA grant.

“I’m really excited to get this prestigious award,” she says. “It’s a real compliment to receive it, knowing how many people applied and knowing the quality of other early career researchers.”