“The imaginative use of technology is much more important than the technology itself,”says Carleton’s Fraser Taylor, a true pioneer of the cybercartography field.

“That holds true, even today.”

The 1960s were an era of dog-eared political maps and classroom globes. GIS, GPS and Google Maps were still decades away, but Taylor was already using early digital mapping techniques to better understand the spatial dimensions of development issues in east Africa.

“My research started off working on rural development in Kenya,”says the Chancellor’s Distinguished Research Professor of International Affairs, Geography and Environmental Studies, who completed his PhD on a part-time basis during the five years that he spent working for Kenya’s Department of Education.

“But in the process, I started using the earliest form of cybercartography. The traditional method was to look at relationships between things and space using a transparent plastic overlay on a map — placing one distribution on it, then another, then another — to see if there are spatial relationships between the features. Now, you can well imagine that after two or three iterations, it becomes impossible to see what’s happening.”

Synergistic Mapping – SYMAP, for short – was an early, vector-based computer mapping program developed at Harvard’s Laboratory for Computer Graphics and Spatial Analysis. SYMAP enabled Taylor to overlay multiple layers of quantitative variables – as many 20 or 30 on a single map — to determine the spatial relationships between them.

After he completed his PhD, Taylor came to Carleton, where he used SYMAP to map publicly available census data, laying bare the city’s hidden frontiers as he produced the Computer Atlas of Ottawa-Hull, likely the world’s first such publication.

“We weren’t mapping physical environments like capes, and bays, and mountains. We were mapping social environments. Things like income levels, poverty and language — and the relationships between them. The work we do today at the Geomatics and Cartographic Research Centre dates back to those early days of applying geospatial analysis to these types of problems.”

Those maps showed stark divisions between Anglophones and Francophones, and their relationships with islands of wealth and poverty in three-dimensional computer-generated images produced using the companion GRID program.

It’s a type of visualization that’s become so common that we might take it for granted, but when Taylor was mapping these social features in the 1970s – more than four decades ago – they were eye-opening and generated significant media interest, with stories about his work on CBC News and in The Globe and Mail.

These maps and visualization helped us see our cities in new ways, but the tools that generated them were primitive by today’s standards. Taylor compares the power of the $25,000 custom-made digitizer he then used to what powers singing birthday cards today. For what he paid for that digitizer in 1967, he could today purchase several complete systems.

To obtain printouts of his early maps, Taylor sent sets of punch cards to the lab at Harvard, each card an individual variable. There, the data could be combined, and a map printed using a dot printer programmed to overlay multiple letters on a single cell on the page to produce different shades of grey — something like how the typewriters of the time would repeatedly type letters onto the same space, when they were jammed. 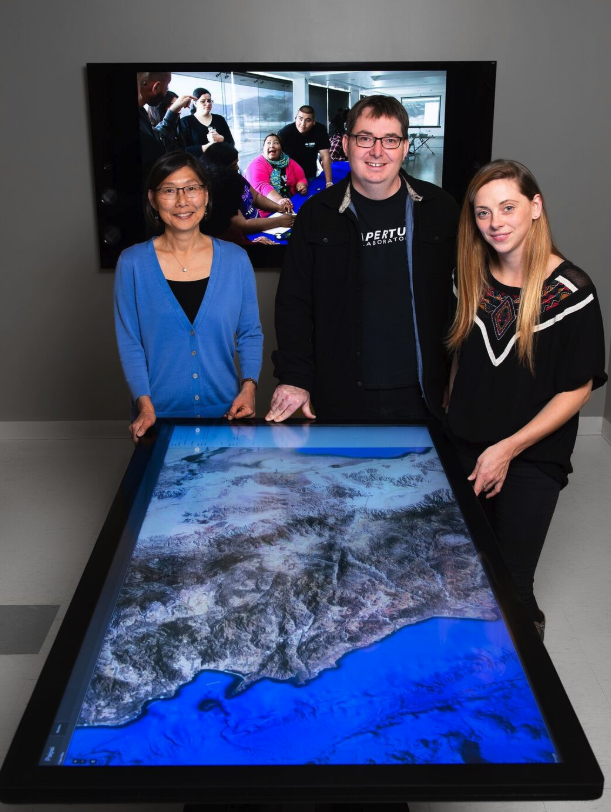 Digital mapping technology has advanced, but as Director of Carleton’s Geomatics and Cartographic Research Centre, Taylor continues to develop new forms of multi-media and multi-sensory cybercartographic atlases using the unique Nunaliit platform developed at Carleton. The Centre partners with First Nations and Inuit communities to help them visualize their unique understandings of their traditional territories.

“Even now, many maps are produced from the top down by a national mapping agency,”he says.

“You get what they decide they’re going to map. Our approach has almost always been the opposite: to map from the bottom up, so that the viewpoint is from the perspective of the local community.”

One such project is a partnership with the Kitikmeot Heritage Society in Cambridge Bay, Nunavut. In 2005, the organization approached the Centre about mapping the community’s traditional place names and stories.

The central Arctic landscape surrounding the hamlet on the southern shore of Victoria Island is vast and unforgiving, and many traditional place names have a practical elements that helps travelers on the land stay safe – one place might be named for perilously swift flow of its river, another for the presence of polar bears.

A current, similar project with the community Gjoa Haven, Nunavut enables present-day hunters to transmit GPS data via satellite to highlight what’s happening on the land in real-time, uploading observations of animal migrations or physio-geographical information such as weakness in the ice. It also allows the hunter to seek help in an emergency as the location of the snowmobile is accurately portrayed on the map.

“The principal thing to remember is that projects like this one are community-generated, and the community controls them, not the opposite way round,” Taylor says.

“When communities come to you with their own money to do something, you can be sure they consider the work to be of value.”

Work by Carleton researchers over 50 years means university is the cradle of this area of this technology type.

Maps and visualization help us see our cities in new ways, understand communities and landscapes in the North, and learn more about animal migration so developing and exploiting new technologies puts Carleton at the forefront of this kind of research.