Mengyao Wu is researching ways in which multi-access edge computing can better support connected intelligence for autonomous driving through his Ericsson Fellowship at Carleton University.

Wu enjoys the connected intelligence aspect to autonomous driving and is hoping to figure out how best to implement edge computing.

“I look at advanced networking infrastructure and functionality to assist autonomous driving. Research, communication and computation are integrated,” says Wu. “Sometimes if the autonomous vehicle has limited computing resources but they want to do some object detection or complex calculation, they can send the task to the edge computing resources. Think of it as a small server attached to a base station.”

“Just like we humans share knowledge with each other, autonomous vehicles can also do that with the help of advanced networking infrastructure,” says Wu. “When autonomous vehicles encounter new driving scenarios, they can collect data, extract information, and share their learning results to others. To co-ordinate such learning schemes, we need computing, caching and security as an integrated service operating close to autonomous vehicles. This is exactly the role of multi-access edge computing.”

Recently, Wu wrote a paper titled, “Intelligence Networking for Autonomous Driving in Beyond 5G Networks with Multi-access Edge Computing” which has been accepted for publication with journal IEEE Transactions on Vehicular Technology. The intelligence networking framework proposed in this paper supports collective learning for autonomous vehicles and adapting to environmental changes in near real-time.

Instead of working as a teaching assistant during their graduate studies, Wu and the other fellows are being supported to focus on their pioneering wireless communications research and get input from both their academic supervisors and Ericsson professionals.

Wu completed his Bachelor of Engineering from Carleton and during his undergraduate program completed two co-op placements. The first one was at Irdeto Ottawa as a test automation developer for four months. He followed that up with a 14-month co-op placement at Ericsson Ottawa working as an indoor radio software developer.

In September of 2020, Wu began a Master of Applied Science as well as his Ericsson Fellowship. After a year of his master’s program, he took an accelerated pathway and applied for the PhD program in computer engineering in which he was accepted and is now pursuing.

Hoping to finish his PhD within the next three years, Wu’s future career goal is to continue conducting research.

“I want to do useful research and to achieve this goal I can try to become a university professor or I can hopefully work directly at Ericsson doing industrial research,” says Wu. 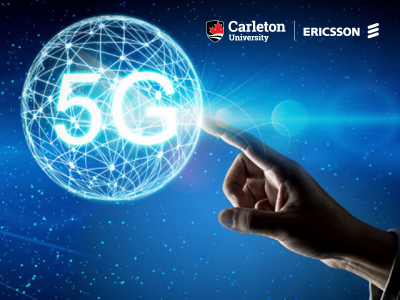