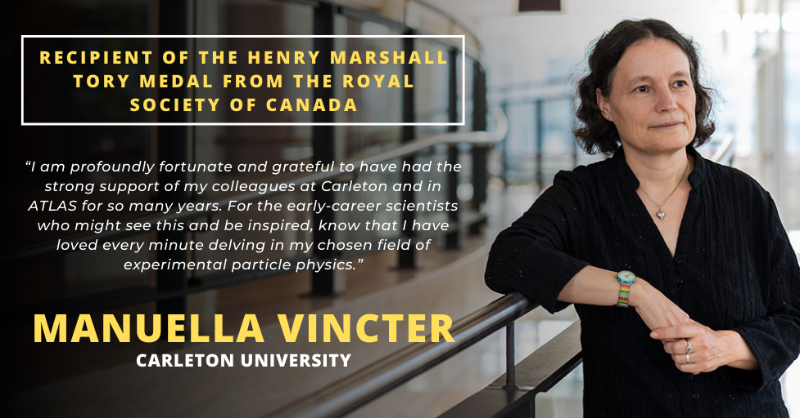 Manuella Vincter was instrumental in enabling the science underneath the discovery of the Higgs boson, including making sure the detector was able to identify some of the particles the Higgs boson produces, that led scientists to make the Nobel prize-winning discovery at the European Organization for Nuclear Research (CERN).

For her distinguished efforts, on November 19, 2021 she accepted the Royal Society of Canada’s prestigious Henry Marshall Tory medal recognizing outstanding research in the scientific fields, typically in the eight years leading up to the award recognition.

“I’ve been working on the ATLAS experiment since 1998 and I’ve seen quite a few different phases of ATLAS including the construction of the detector, which Carleton University played a major role in the realization of the project.”  One of its subdetectors, the Forward Calorimeter, was constructed at Carleton before making its way to CERN on the borders of France and Switzerland.

Then, in 2009 the teams working on ATLAS started collecting data.

“One of the first things that you do with a new machine isn’t just to look for the unexpected. Rather, you convince yourself the machine works and so it’s producing the things you’re expecting to see, but maybe you can measure them with greater precision than previously done. The LHC has great physics reach so from the start it was very competitive in some of these measurements,” says Vincter with a smile.

What they were expecting to see in the new machine, the LHC, were the particles produced by the Higgs boson. 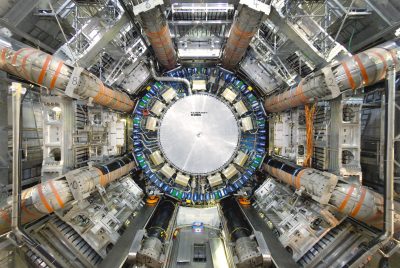 In 2010 the first high-energy proton collisions took place, which Vincter described as a “very exciting time” at CERN and explains that a lot of the studies in 2010 and 2011 were “related to the weak interaction and the strong interaction; such studies form part of the basis of this medal.”

It was research that was instrumental to finding the Higgs boson.

She explains, “the Higgs itself is a particle that doesn’t hang around too long. In fact the moment it’s produced, it immediately decays to other particles. You never actually see a Higgs boson in your experiment or detector, but rather you see what it decays to. In the beginning we saw only a handful, so very few.  But we wanted to have as many as we could to convince ourselves that what we were seeing truly was the Higgs boson. One of the important ways the Higgs boson decays is to four electrons simultaneously. If you miss one of them, you miss the ability to see a Higgs boson as you need to see all four.”

To ensure this could be done, Vincter’s research focused on “maximizing our ability to see these electrons, ensuring we were able to see every Higgs boson that we could. In the discovery phase, we saw a dozen Higgs boson candidates in the four-lepton channel, and it makes a big difference if you see a dozen, or only a few.  So that was one of the things that I worked on that was really important to the discovery.”

Prior to publishing the results, Vincter was a member of ATLAS’ internal committee reviewing the scientific paper announcing the discovery of the Higgs boson.

“Everything we’ve seen about the Higgs boson is really what we thought we were going to see. It seems to be the one described by our best expectation of how nature works, without any deviations. You never know what you’re going to see, as nature has already decided what everything is going to be like. It’s up to us to discover what nature has prepared for us. We are now making very precise measurements,” explains Vincter of the discovery.

As the LHC operates for three years conducting experiments and research, followed by two years off for maintenance and technical upgrades, Vincter returned to CERN in 2014 as part of a prestigious two-year Killam Fellowship recognizing Canada’s most distinguished researchers and a one-year sabbatical. “It was a very productive time as I had three uninterrupted years to really focus on my research. I published several very interesting papers on studies about the weak and strong interactions.”

Given the enormity of the ATLAS experiment, it’s understandable that it takes a team to bring this research to life. Often, a team of thousands. 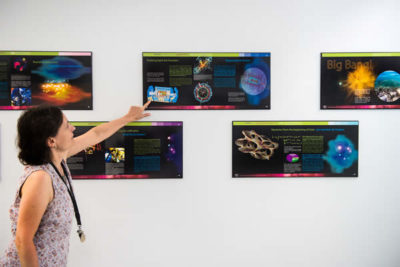 “How we do science in experimental particle physics is very different to how it’s done in other fields, just because it’s such a huge collaboration. It’s not uncommon to have 3,000 authors when submitting a paper. The strength in having large numbers like that is that we have a huge range of skillsets though it makes our individual contributions much harder to understand. But I wouldn’t want to have it any other way because it’s such a collaborative process. The actual measurement is a small part  of the research process.”

Vincter’s face lights up and she speaks with passion when talking about her colleagues on the project. “I get to work with so many early-career scientists, and for me one of the things I loved about the years when I was doing these measurements was working with them – the excitement and energy they bring – for a year or two while they’re working on their paper.

“I was thrilled the Royal Society of Canada saw beyond and were able to understand that individuals can have enormous contributions even if the authorship of the publications is shared with many other people.”

About the Royal Society of Canada's Henry Marshall Tory Medal