The Large Hadron Collider (LHC) is the world’s most powerful particle accelerator. The underground facility at the European Organization for Nuclear Research (CERN) near Geneva uses electromagnetism to propel beams of protons through a 27-kilometre-long underground loop at velocities that approach the speed of light. Then, the LHC forces beams of protons travelling in opposite directions to collide inside particle detectors along its route. This produces showers of tiny particles that can number into the trillions.

The ATLAS Experiment is the largest particle detector at CERN – or anywhere else, for that matter. ATLAS made headlines when it was used to identified the Higgs boson in 2012, but that pushed its outer limits. When physicists wanted to probe more deeply into the fundamental particles that make up our universe, ATLAS couldn’t keep pace.

Now, it’s getting an upgrade.

Researchers at Carleton are part of an international collaboration that has designed the New Small Wheel, a new technology that will allow ATLAS to better detect muons. These tiny, abundant elementary particles are produced when other elementary particles decay rapidly, and a better understanding of their properties could help lead to commercial applications, including in ultra-fast computing, semiconductors and clean energy.

“If the probability that a collision produces an exciting particle is one in a million, then you will need to produce several million particles to be able to identify these events. You have to make the denominator bigger,” says Dr. Alain Bellerive, a Professor of Experimental Physics who led Carleton’s contribution to the project, which was funded in part by the Canada Foundation for Innovation.

“You cannot increase the energy in the LHC. It is already maxed out. What you can increase is the rate of collision, but when you do that, ATLAS can’t process all of the additional information. It’s just the way the detector was built.”

The upgrade to the detector is slated to be completed in 2022, and the new components will enable it to process the particle showers that are created when proton beams collide once every 25 nanoseconds. That’s 40 million collisions each second – each generating millions of particles.

“Every one of those could be a few megabytes of data. Then suddenly, you have a petabyte of data coming your way,” says Bellerive.

“There’s no way to compute that. So, a system must be able to identify whether a particle interesting or not within a millisecond.”

The New Small Wheel will do this, though it isn’t exactly small. The ATLAS Experiment itself is shaped like an enormous can of soda. It is a cylinder is 46 metres long and 25 metres in diameter, buried in a cavern 100 metres beneath the cluster of research facilities at CERN’s campus in the bucolic Swiss countryside.

ATLAS wraps around the vacuum tubes that carry the beams of protons, and the New Small Wheel will record the particle collisions that happen inside. It is composed of 16 trapezoid wedges that come together to form a disc 9 metres in diametre.

Physicists in Canada, Chile, China, Israel and Russia have all contributed to the production of this new technology. Over the past year, the pieces of the structure have been coming together in ATLAS Carleton’s lab on the main floor of the Herzberg Laboratory. 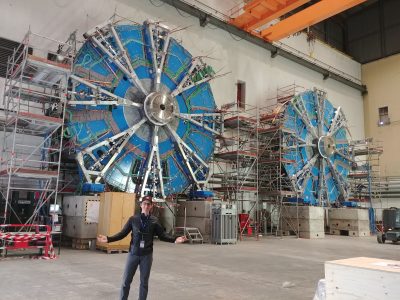 The finished product will act as a trigger. This is a kind of filter that automatically sorts out particles that are already known to physics, and are thus less interesting to these experiments. The overwhelming majority of the trillions of particles produced will fit that definition.

Eliminating data from those particles will enable researchers to focus on those that could be interesting. And specifically, fast-travelling muons coming from decaying Higgs bosons, dark matter, or other elusive exotic particles.

“There are two technologies in the New Small Wheel that act as sensors,” says Bellerive.

“They are independent systems because it is important to have redundancy to ensure the New Small Wheel is robust. It needs to last for a decade, at least.” 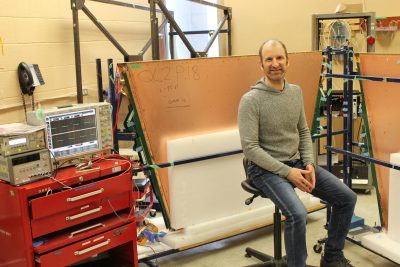 These two technologies are called micromegas detectors and small-strip Thin Gap Chambers (sTGC) detector. The latter has been assembled at Carleton.

sTGC detectors are multilayered trapezoid wedges, and on the inside, they are strung with ultrafine wire. They look a little like a harp, but with tungsten strings plated in gold, and as thin as a human hair.

When ATLAS begins its next phase of experiments, the sTGC detectors will be filled with gas and these wires will be loaded with approximately 3000 volts of electricity. This will enable them to be on standby to detect the muons within the showers of millions of particles.

But the key contribution is the trigger. In all, the New Small Wheel will have 128 detectors and more than 2 million readout channels. But instead of transmitting all of that data to the surface, it will process it using purpose-built integrated circuits.  These are no normal circuit boards. At 1.5 metres square, they are far larger than any commercially available circuit boards. The physicists worked with manufacturers in Italy and the United States to develop the oversized tech. At the beginning of the project, there wasn’t even commercially available equipment capable of manufacturing a circuit board of that size.

These circuit boards will send data directly to sensors mounted on the edge of ATLAS, and automatically exclude particles that aren’t relevant.

Assembling all of this delicate machinery has been a painstaking process, and the work of Dr. Mohsen Naseri has been critical to meeting the project timelines. The Research Associate in Bellerive’s lab has worked tirelessly. He has supervised the assembly of the components of the New Small Wheel and does quality control to validate their construction.

The materials were prepared at TRIUMF, Canada’s particle accelerator centre at the University of British Columbia in Vancouver. With construction set to be completed, Naseri is preparing to ship them to McGill University in Montreal where they will undergo further testing.

Physicists at McGill will evaluate the equipment’s ability to sense muons using background radiation. The cosmic rays that are always present at Earth’s surface contain muons that are created when they interact with the upper atmosphere. After validation at McGill, the components will undergo final testing at CERN before being installed in ATLAS.

“This is really big for any university. We sweated blood on this thing, especially during COVID-19,” says Bellerive.

“When the university shut down, this project was behind schedule. COVID forced us to physically distance, but that helped some things go faster. The team worked seven days a week, instead of doing everything in five. The gluing process takes eight hours, so working on weekends allowed more time for it to cure. Even if the additional cleaning, eating in different lunch rooms, and logistics were a nightmare, it was actually kind of a good thing for this project.”