When Japan’s Fukushima nuclear reactors failed in the wake of a major earthquake and tsunami in 2011, Carleton University’s Trevor Findlay was in the middle of writing a report examining global nuclear policy.

Findlay found that the immediate international response to the disaster revealed gaps in the powers and capacities of the global ‘nuclear watchdog’, the Vienna-based International Atomic Energy Agency. He has devoted much of his research since then at the Norman Paterson School of International Affairs (NPSIA) looking deeper into why.
One reason was that Japan’s reluctance to share information made it difficult for the agency to inform the rest of the world about the disaster and to organize prompt assistance, he found. But in addition the agency itself appeared alarmingly reluctant to live up to its self-proclaimed role as the ‘hub’ of global nuclear governance.

Findlay’s findings are contained in his new report called Unleashing the Nuclear Watchdog: Strengthening and Reform of the IAEA, published in July of this year by the Centre for International Governance Innovation in Waterloo, Ontario.

“There are some efforts being made to strengthen the IAEA, but it’s not clear it will do any good without more political and financial support for expanding the agency’s role,” says Findlay.

“There is, for instance, a post-Fukushima nuclear safety action plan under which member states are encouraged to submit nuclear reactors to peer review every couple of years. But as usual, member states are reluctant to give up their sovereignty and such reviews will likely remain purely voluntary.”

Findlay plans to turn his IAEA report into a book that will focus on the international nuclear crises that have shaped the agency since it was founded in 1957.
The three main ones he will study are:

•  Chernobyl, a 1986 nuclear accident that took place in the Ukraine, which led to reform in the nuclear safety area;

•  The discovery after the Gulf War (1990-1991) that Iraq had come close to acquiring nuclear weapons. This paved the way for improvements in nuclear safeguards;

•  The terrorism attack on New York City in 2001, better known as 9/11. Although the incident did not involve nuclear weapons, the IAEA increased its vigilance over nuclear security out of recognition that terrorism could involve that form of attack. 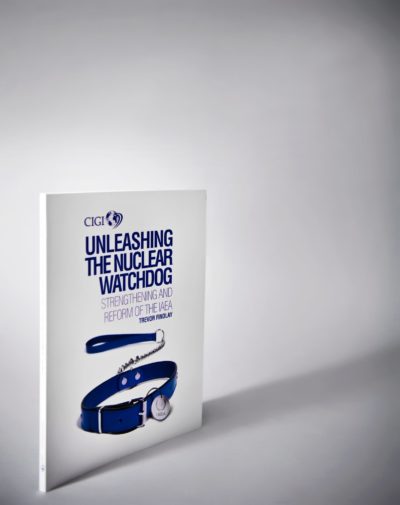 The IAEA project is part of Findlay’s larger investigations into arms control and treaty compliance. He just returned from a sabbatical at Harvard University’s Belfer Center for Science and International Affairs, where he has a continuing visiting fellowship.

“It’s a great link for Carleton considering that the center is the home of some of the best research on global nuclear governance,” he says.

Findlay has used the talents of Carleton’s NPSIA students extensively in his nuclear research projects, especially in producing his 2010 report on The Future of Nuclear Energy to 2030: Implications for Global Governance.

“I had several students compile an online database that tracked all countries interested in acquiring nuclear energy in the future,” he says.

“They looked at all the various countries and their plans and policies. Since rhetoric and over-ambitious nuclear plans rarely meet reality, it was a tricky exercise but the students did admirably.”

Iran is one country to watch in particular regarding nuclear policy, Findlay says. The IAEA has been “struggling valiantly” to get definitive information about the country’s secretive nuclear program conducted over the past 20 years, but Iran continues to obfuscate and prevaricate, he notes.

But he adds, the situation is not really the IAEA’s fault.

“They have to rely on the United Nations Security Council to take enforcement measures, and Russia and China are blocking more serious action.”

“The IAEA is not as powerful a ‘nuclear watchdog’ as some people think. Ultimately they can’t go in there and do inspections without the Iranians’ permission.”

All the more reason for the strengthening and reform of this vital international body.