Welcome to the DarkSide: Canada Foundation for Innovation funding enables upgrades to Carleton-led projects in the search for dark matter

To the human eye, the night sky appears as a tapestry of inky darkness punctuated by the twinkling lights. In between the countless stars are vast stretches of apparent nothingness, but the vacuum of space is not a void. There is something out there. 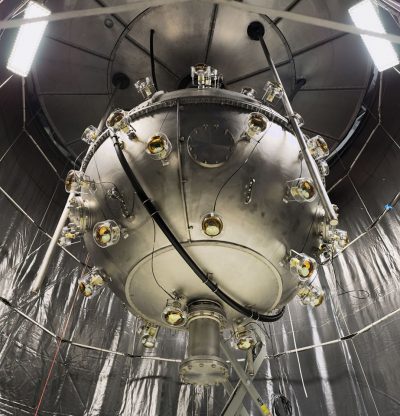 We’re not exactly sure what, but Carleton University researchers are searching for answers. At the Sudbury Neutrino Observatory Lab (SNOLAB) in northern Ontario, an experiment called DEAP-3600 has been seeking signs of dark matter since 2016. It consists of an enormous sphere made of clear acrylic and filled with 3.3 tons of liquid argon. The sphere is surrounded by 255 carefully calibrated light sensors that monitor the argon for signs of dark matter. 24 hours a day, seven days a week.

These sensors have been calibrated to detect the electric pulse created by a single particle of light. If a dark matter particle collided with an argon atom, it would create a tiny flash of light that they could detect. 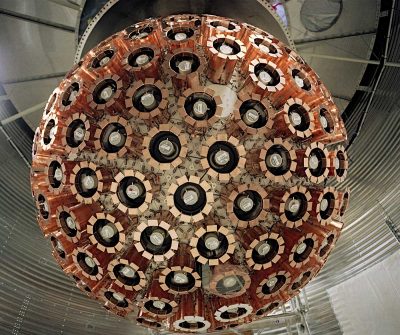 DEAP-3600 is a Carleton-led international collaboration that includes researchers from the University of Alberta, Canadian Nuclear Laboratories, Laurentian University, Queen’s University, SNOLAB and TRIUMF, Canada’s Particle Accelerator Centre. It is the most sensitive experiment of its kind in the world, and almost $7 million in new funding from the Canada Foundation for Innovation will enable upgrades that make DEAP-3600 even more sensitive to dark matter. The funding will also help fund a next-generation liquid argon detector that will be even more sensitive: DarkSide-20K.

“The existence of dark matter has been inferred for more than eighty years, but it has never been directly observed,” says Mark Boulay, a Professor of Experimental Physics at Carleton, and the lead on the project.

“Dark matter doesn’t interact very often with other particles, but we know it’s out there, because we can observe its effects through gravity. Objects in a galaxy move much faster than they should, given the amount of material known to be in that galaxy. To explain the movement of objects in space, something else must be exerting gravitational pull. That something is dark matter, and to explain the movement of stars in space, there must be about five times more dark matter in the universe than normal matter. A leading theory is that dark matter is a particle that has never been observed, and is not part the Standard Model of Particle Physics.”

It must be abundant, but because its interaction with normal matter is weak, a dark matter particle could pass seamlessly through solid materials like rock. And if a dark matter particle passing through Earth collides with an argon atom inside an experiment like DEAP-3600 or DarkSide-20K, that could cause the atom’s nucleus to recoil and shed a tiny electrical charge. This would revolutionize our understanding of physics — the first direct evidence of a particle that makes up most of the universe.

But it would also be an extraordinarily subtle event, and that’s why the experiment is taking place deep underground. Earth’s surface is constantly bombarded with radiation from cosmic rays. Above ground, a liquid argon-based experiment would record millions of particle interactions caused by this radiation, and generate so much data that identifying which interactions might be dark matter particles would be impossible.

But DarkSide-20K will be located at Gran Sasso National Laboratory – the largest underground particle physics facility in the world. The facility is Italy’s National Institute for Nuclear Physics, and it is buried deep inside Gran Sasso mountain, about 120 km northeast of Rome.  The rock of the mountain above the lab filters out the cosmic radiation that would interfere with the experiment if it was conducted at Earth’s surface.

The new CFI funding will enable the construction of the ultra-low background central detector and readout electronics in DarkSide-20K, a key Canadian contribution from researchers at the University of Alberta, Carleton, Queen’s and TRIUMF. In the future, the international collaboration is looking to build an even larger dark matter detector named ARGO, which would be housed at SNOLAB at Sudbury.

“It is really a needle in the haystack problem to identify an event that is a true dark matter candidate,” says Simon Viel, an Assistant Professor of Experimental Physics who is leading the computational analysis for the DEAP-3600 experiment.

“We can identify events of interest, and use our computing clusters to reconstruct these events, and determine if an event could have been caused by a dark matter particle. We already know and observe the types of light pulses that are generated by other background events, so we are looking for something that is different from what we have already observed.”

The Search for Dark Matter: New Window on the Universe